Swing Control, your partner in your passion for golf and fashion, will have you look striking as you strike the ball while donning the fabulous pieces from our Look Book!

Our items this season echo the warmth and colors of springtime, allowing you to look your best on the golf course. Designed to deliver maximum comfort and performance, these pieces offer freedom of movement and fantastic fit so  all you will have to think about is how you will play your game.

Capri pants first rose to fame in the 50s in the island of Capri in Italy, so that’s probably also where they derive their cool, laidback character. Our yellow Classic Golf Capri pants are gorgeously bright like the Mediterranean sun.

The best thing about capris is that they make just about every woman look slimmer. Swing Control’s, in particular, are fabulously soft, sleek, and stretchy, making them a must-have item of clothing not only for your golf outings but for other outings as well.

Our classic golf capri pants are available in 9 different colors.

With its lovely earth color and tailored construction, this pair of Backswing Boot Cut pants from Swing Control is definitely safari meets très chic. It is made of Techno Stretch, a fabric blend composed of rayon, nylon, and lycra which gives the garment superior flexibility and strength.

These backswing boot cut pants are a favorite of pro LPGA golfer Laetitia Beck, which comes as no surprise considering how comfortable they are. They have just enough flair at the bottom to make you move with ease and make you look like a million bucks!

The skort has built-in shorts inside while the capri pants sport our signature tummy control stretch fabric construction.

If you’re looking for patterned pieces, check out our new Paisley Fairway Crop and Paisley Eagle Ankle pants. These items are crafted to appear really slim, making them look absolutely fabulous on anyone. They also have side pockets for added functionality.

To see our other Spring 2016 favorites, check out our gallery of products and shop now. Also discover our products on sale and enjoy big savings on items you’ve always wanted to have.

By: Alice and Danny Scott — 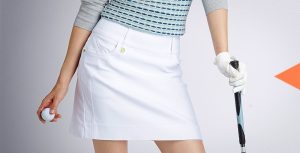 ntrol” year round. Well, they do seem to have nailed it. I like the way they use their Lycra. If you are thinking grueling girdle garb, or suffocating spanx, think again. This is a comfy insert that allows free swinging movement with easy on and off, no squishing struggles, no slipping down during the round and having to pull up.

That’s great but even better is the design elegance of Swing control bottoms. Pretty zippers and silver metal snaps add snappy flair.  Shorts, capris, skinny leg or boot cut pants are personal fashion preferences. Swing Control offers all the choices with the elasticized comfort and detailing available in each.

Maybe you’ll like the resort short, chip short, or zipper master short. Capris are pretty in Classic, Club or Pocket designs. Or select from the Fairway Crop or one of my favorites, the Snap Master Crop with 6 silver circular snaps on the outside of the bottom leg and matching snaps on back pocket. The white or black pair goes with everything.

Pants available are Eagle Ankle or Backswing Bootcut and skorts are Teetime or Birdie. The lightweight fabric makes for easy roll up and packing for traveling.

Who wants super slimming? Most of us do. Sure, big can be beautiful too but we all want smooth and Swing Control delivers that. It really works.

Black, white, baby pink, mint, yellow, electric blue and new red are the color choices depending on the style. All have the signature magnetic ball marker and tee loop on the waistband – handy on the course, simply decorative for wearing elsewhere.

They call it the most flattering golf wear you will ever wear. You have to try to believe. For a limited time new shoppers get 20%off online at www.swingcontrol.com Gift certificates are available and Mother’s Day is coming up, hint, hint.

American golf sensation Lexi Thompson made headlines when, at the age of 12, she became the youngest player ever to qualify for the U.S. Women’s Open. Although the record was broken by player Lucy Li in 2014, Lexi went on to become one of the most prominent names in golf today.

In September 2011, she became the youngest-ever winner of an LPGA event when she won the Navistar LPGA Classic. Almost 3 years later, she defeated American player Michelle Wie to win the 2014 Kraft Nabisco Championship, her first major championship.

Read on to learn about some of Lexi’s techniques, which you can use to improve your own game.

Close your eyes while putting

In a feature for Golf Magazine online, author James Sieckmann noted how Lexi Thompson struck most of her putts at the 2016 Honda LPGA Thailand with her eyes closed, apparently as a technique to remove the mental clutter that would otherwise have prevented her from doing her best. It may sound like Luke Skywalker using the Force to shoot down the Death Star, but according to Sieckmann, she was actually on to something.

He talked about the “Quiet Eye Technique,” which was first described in a scientific study conducted by researchers at the University of Calgary. They discovered that one of the differences between professional and amateur golfers is that the former have a “quiet gaze” when they putt while the latter don’t. Essentially, when players are closer to the hole, their eyes tend to shift because of distractions—whether it’s worrying about the outcome of their motion, agonizing about the technique they must use, or thinking about other people’s reactions to their shot. By closing your eyes, you become calmer and more focused, putting you in a better position to putt at your best.

Improve your hand-eye coordination with boxing

Lexi Thompson revealed in a feature for Golf Digest that boxing is part of her fitness routine with Craig Slaunwhite, the strength and conditioning coach for the Florida Panthers ice hockey team. But aside from keeping her in shape, boxing also allows her to polish her hand-eye coordination, in addition to helping her develop her stamina and making her arms and wrists stronger. “I’m sure it helped me pick up the two wins I got at the end of the 2013 season,” she said.

Boxing is beneficial for golfers because not only does it get them in great shape, it also exercises the same muscles used in golf swings. The sequencing of the muscles being used is quite similar as well, with both boxing and golfing requiring a player to generate the power from the lower body up to the shoulders to make a shot.

Jump off your toes to gain distance off the tee

Reviewing Lexi Thompson’s driving technique for the Golf Channel, analyst Paige McKenzie noted how the player’s power not only comes from her big shoulder turn against a small hip turn when making a drive, it also comes from her unique technique of jumping off her toes during the last part of the swing. The result is a lot of power, which helped her achieve a driving distance average of over 290 yards for the 2016 LPGA season in February, outranking all other competition at that time.

Lexi’s extraordinary ability to tee off long distances comes from keeping up with the boys in her family, namely her older brother, Nicholas, who has been a member of both the PGA Tour and the Nationwide Tour, as well as his other older brother, Curtis, who attends the Louisiana University and is a member of the school’s golf team. Last April, she bombed a 359 yards at the Ko Olina Golf Club in Hawaii during the Lotte Championship.

The Ladies Professional Golf Association is one of the longest-running women’s professional sports associations in the world. Founded in 1950, the organization has grown from its roots as a playing tour into a non-profit organization involved in every facet of golf. The LPGA Tour and the LPGA Teaching & Club Professionals (T&CP) comprise the backbone of what has become the premier women’s professional sports organization in the world today. The LPGA maintains a strong focus on charity through: its tournaments; its grassroots junior and women’s programs; and the formation of The LPGA Foundation. The LPGA is under the guidance of Commissioner Michael Whan and is headquartered in Daytona Beach, Fla.

Michael Whan is the eighth commissioner of the LPGA (Ladies Professional Golf Association), one of the longest-running and most successful women’s sports organizations in the world. Whan assumed the leadership role at the LPGA on Jan. 4, 2010 with an eye toward enhancing business relationships, increasing exposure for the players and maximizing the LPGA experience for fans.
Whan, 49 (DOB: Feb. 10, 1965), started his business career at the Procter & Gamble Company in 1987, rising within the ranks as a Brand Assistant, Brand Manager and eventually Director of Marketing, Oral Care, before pursuing his passion for sports. In 1994-95, he served as a Vice President and General Manager at the Wilson Sporting Goods Company responsible for all aspects of the golf ball and glove business. He also managed the marketing department, two manufacturing facilities and the Research & Development division.

Today’s LPGA Tour features the most talented global group of professional athletes who, in 2014, will compete in 32 official money events in 13 countries. Of the more than 460 LPGA Tour members, approximately 230 are active competitors throughout the season. Of the approximately 230, 128 are international members representing 27 different countries.
The T&CP Membership

The LPGA Teaching and Club Professional (T&CP) membership, founded in 1959, boasts the largest membership of women golf professionals in the world. LPGA T&CP members are certified as golf instructors, coaches and business managers through a comprehensive curriculum designed to meet the changing needs of the golfing public.

More than 1,500 strong, LPGA T&CP members are dedicated to the advancement of golf and serve throughout the golf industry as head professionals, assistant professionals, teaching professionals, directors of golf, owners of golf schools and facilities, golf administrators, college and high school coaches and more.

LPGA T&CP members support the LPGA’s various grassroots programs that were created to involve women and youth in golf as well as contribute to the overall growth of the sport. These programs include LPGA-USGA Girls Golf, LPGA Tour Junior Clinics, the LPGA Lesson Zone Presented by Volvik, and LPGA Golf Clinics for Women.

Founded in 1981, the Symetra Tour is called “The Road to the LPGA” and is the official developmental tour of the LPGA. The Symetra Tour was acquired by the LPGA in 2007 and is now based in the LPGA’s headquarters in Daytona Beach, Fla. The tour operated as the Duramed FUTURES Tour from 2006 to 2010, when Duramed Pharmaceuticals, Inc., became the title sponsor and then as the LPGA Futures Tour in 2001. The 2012 Symetra Tour schedule runs from March through September and has more than 300 players competing from around the world. The top-10 players from the LPGA Futures Tour money list earn LPGA membership for the following year. For more information
Visit SymetraTour.com